The founding of what became known as the Inland Empire Section was in 1914. The founders were 11 engineers riding on a train to Pullman. The purpose of the organization was to "encourage acquaintance and social intercourse among members of the Society (ASCE) in this vicinity and to have papers presented and discussions along lines of interest." 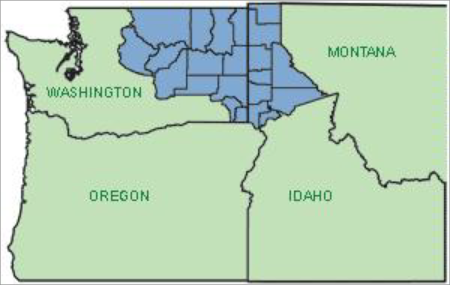 and Clearwater, Nez Perce and Lewis counties.)  The "inland Empire" gained it's name for the collection of mining, logging, and railways that were developed in the region.

The Inland Empire Section is part of Region 8 in the ASCE organization.

A Brief History of the Inland Empire Section

In 1989, the Inland Empire Section of American Society of Civil Engineers (ASCE) celebrated 75 years of service to its members, the profession and the community. As part of that celebration the following brief review of the Section's history was prepared.

What became known in 1981 as the Inland Empire Section of ASCE was organized on January 17, 1914, by 11 civil engineers traveling by train to Pullman, Washington to attend a meeting of the Associated Engineers of Spokane. The group approved a constitution, elected C. S. MacCalla its first president and chose as its name the "Spokane Association of Members of ASCE". The purpose of the organization was "to encourage acquaintance and social intercourse among members of the Society (ASCE) in this vicinity and to have papers presented and discussions along lines of interest."

In 1914, "this vicinity" included a substantial part of the Inland Northwest. ASCE sections that were organized later either wholly or in part from the Spokane Section's original territory include Utah (1916), Wyoming (1938), Montana (1945), Southern Idaho (1948) and Columbia (1950). The Montana and Columbia Sections were organized previously as branches of the Spokane Section.

Among the more satisfying activities of the Section has been the recognition of outstanding civil engineering achievements (OCEA) and individuals within the Section's boundaries. Civil Engineering works that have been recognized include the Grand Coulee Dam, designated in 1958 by the National Society as a "CE Wonder of the World." The Mullan Road, which lies entirely with the original Section boundaries, was designated as a National Historic Landmark of ASCE in 1979. The third powerhouse at Grand Coulee was selected by the PNC as its OCEA in 1981. The Noxon Dam (1960), The Rock Island Dam Low Head Power Plant (1979) and the Upriver Hydroelectric Dam Project (1984) also have been designated Outstanding Civil Engineering Achievements by the Section.

In 1957, the Section began recognizing annually from within its membership an Engineer of Merit. The first Engineer of Merit was longtime section member and contributor Thomas M. Judd. WIlliam Maloney was honored in 1958. Mr. Maloney was one of the 11 founding members of the Section in 1914. He served also as Section president in 1938 and later as a National Director of ASCE. A complete list of the Section's Engineers of Merit can be found on this website.

Section members who have received recognition as Honor Members of the National Society of ASCE are Frank Banks, Emmet Moore, Takeshi Somey and George B. Wallace. There have been three national Mead professional paper award winners from the Section. Dan Yake and Ken Carper won the National Associate Member award in 1981 and 1983, respectively. Randy Kolar of the University of Idaho Student Chapter won the national paper award in 1984.